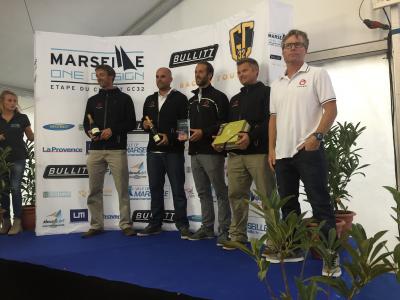 Having had to contend with light winds yesterday, the contrast could not have been greater on Day 4 of the GC32 Bullitt Tour in Marseille. The winds were brutal, with gusts of 34 knots at least - and often more. That meant that the Race Committee had no choice but to announce that racing could not take place. Their inevitable decision meant that Alinghi win the final event of the season in the GC32 Tour, a fantastic achievement and one that owes much to the team's stellar performances on days one and two. Oman's third-place finish in the regatta meant that they have secured the 2015 GC32 Championship, pipping Alinghi, who finish in second. Everybody at Alinghi would like to send Oman their congratulations on the title. Worthy adversaries indeed! Speaking after the event had concluded, Morgan Larson said: “It’s a pity we didn’t get any racing today but it's been a fantastic season. A while back I thought foiling was a bit of a fad, but clearly it’s here to stay. It’s awesome, we’re learning more every day, and it’s been a great season for the GC32 class.” It's been a lot of fun... Marseille: Alinghi Spindrift Sulatanate of Oman Team Engie Armin Strom Overall: Sultanate of Oman Alinghi Spindrift Armin Strom Team Engie Pictures credit: Sander van der Borch/Bullitt GC32 Racing Tour 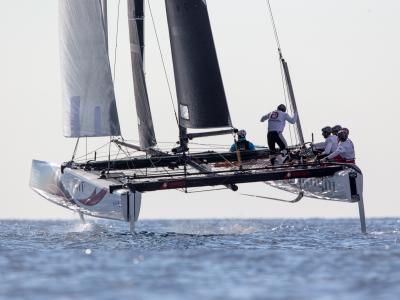 It was a very tough day on Day 3 of the GC32 Bullitt Tour in Marseille, with light but shifting winds making it tricky for all of the teams. And, as it played out for Alinghi on a number of occasions, even if you nailed the start, the fact that the wind might die meant that your rivals might be able to use the momentum to behind you to seize the initiative. But that is not to take away from any of the competitors, as conditions were the same for all! There were to be no race wins for Alinghi on this penultimate day on the Med, but the team should be proud that they have retained their lead at the top of the regatta's leaderboard, albeit having seen it slimmed to three points ahead of Spindrift in second. Though there were no wins, the fact that Alinghi were second in three of the day's races has put them in a good place heading into tomorrow's final day. There is also some good news, with some good breeze forecast. Should be good...! Pictures credit: Sander van der Borch/Bullitt GC32 Racing Tour 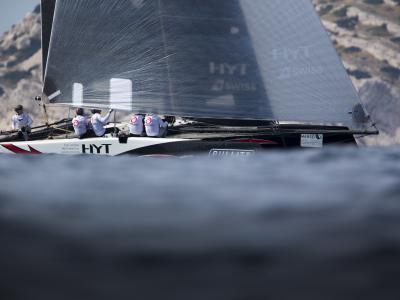 At the end of Day 2 – and therefore halfway through the competition – Alinghi remain at the top of the leaderboard in Marseille for the GC32 Bullitt Racing Tour. It was going to have to be some performance were the team to replicate yesterday’s storming performance, but they came very close to doing so, winning two races out of five. Things got off to a good start, with the team winning the first race ahead of Spindrift. This was followed by three races that saw Alinghi finish second, third and fourth respectively, before they got back to winning ways in the final race of the day. After a perfect start, Morgan Larson and the team did not look back, leading the field for the entirety of the race. Today’s performance means that Alinghi now lead their closest rival by seven points. However, with two more days of racing to go, the contest remains very much open. Last but not least, Alinghi send their good wishes to Armin Strom, who were very unlucky to damage their rudder having hit something in the water in Race 4. Hope to see them back on the water tomorrow! Pictures credit: Sander van der Borch/Bullitt GC32 Racing Tour 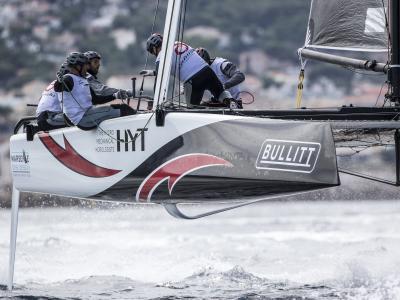 The GC32 Racing Tour has rolled into Marseille this week and the Mediterranean has seen fit to provide the teams with good conditions for racing. With winds picking up nicely before the gun was fired, the sailors had the opportunity to push their flying machines as they are meant to be pushed. Six races were run and it could not have gone much better for Ernesto Bertarelli's Alinghi, with the team recording four victories, leaving them in a great position atop the leaderboard heading into Day 2. It wasn't always clear sailing - literally. In Race 2, Alinghi were up on the foils, going at over 20 knots, when the door was shut by a rival, meaning that a collision with the Race Committee looked imminent. Morgan Larson and the team managed to pass clear - by millimeters - and, with the Umpire's call green, went onto to take the race, having been 4th at the mark. High drama, and let's hope for more tomorrow. Though perhaps not *so* close... ! Pictures credit: Sander van der Borch/Bullitt GC32 Racing Tour 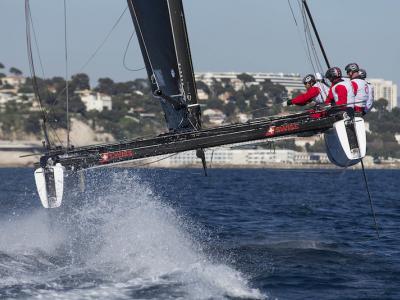 This week has seen four teams sailing and flying on the waters of the city of Marseille. It was Alinghi’s first regattas on its new GC32. No races were sailed today, as the gusts were up to 30 knots. Alinghi’s crew composed by Ernesto Bertarelli and Morgan Larson at the helm, Nicolas Charbonnier (tactic), Pierre-Yves Jorand (mainsail), Nils Frei (trimmer), Yves Detrey (bow) finished Marseille GC32 test event in second position. This first test event was the perfect opportunity for the team to learn as much as possible, to sail this new foiling machine and improve as much as possible it’s flying abilities before the first official event that will take place in Traunsee, Austria from 27th to 31st of May. Enjoy the magnificent pictures taken by Gilles Martin-Raget in the gallery below. Pictures Copyright: Team Alinghi / Gilles Martin-Raget