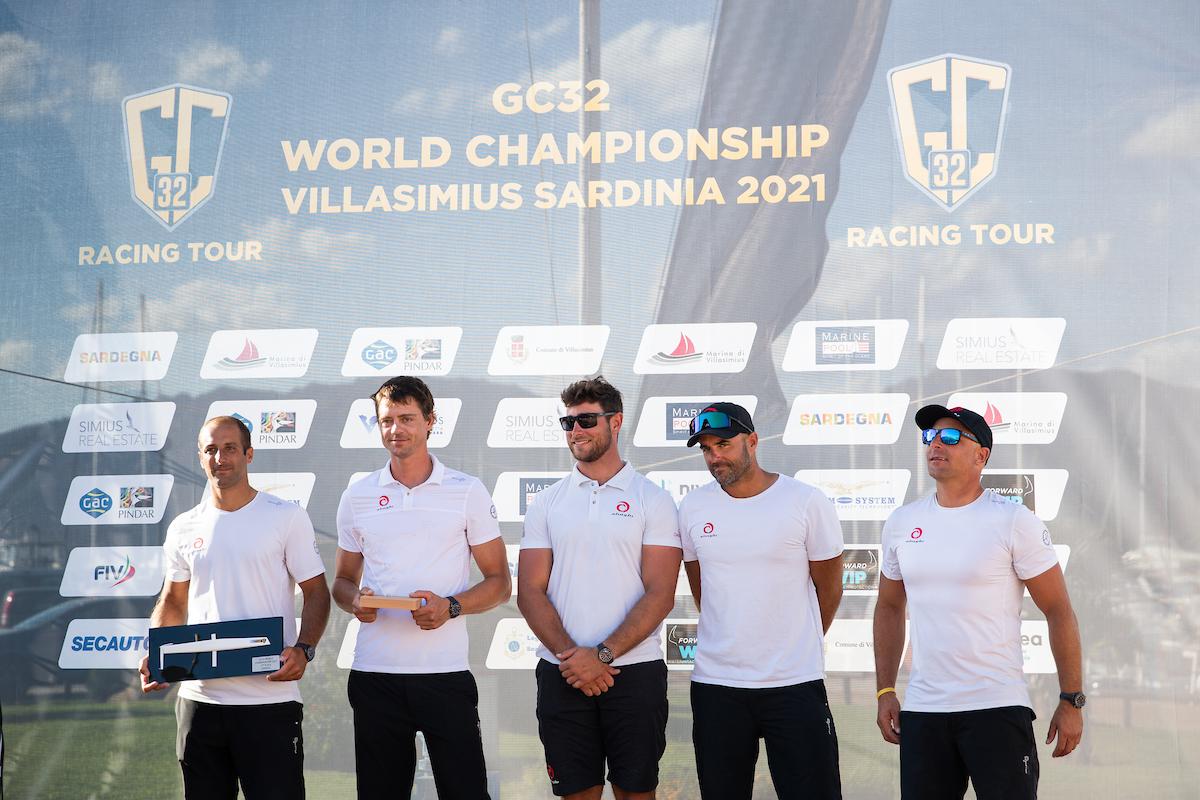 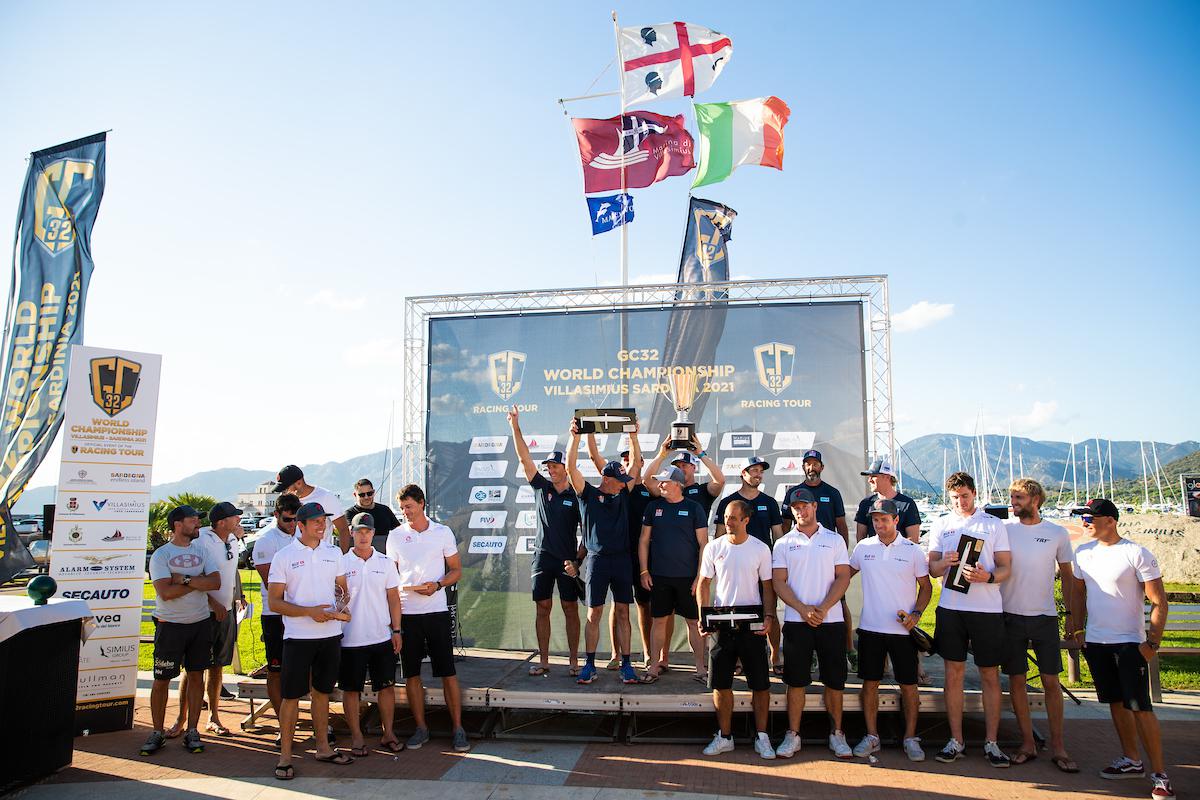 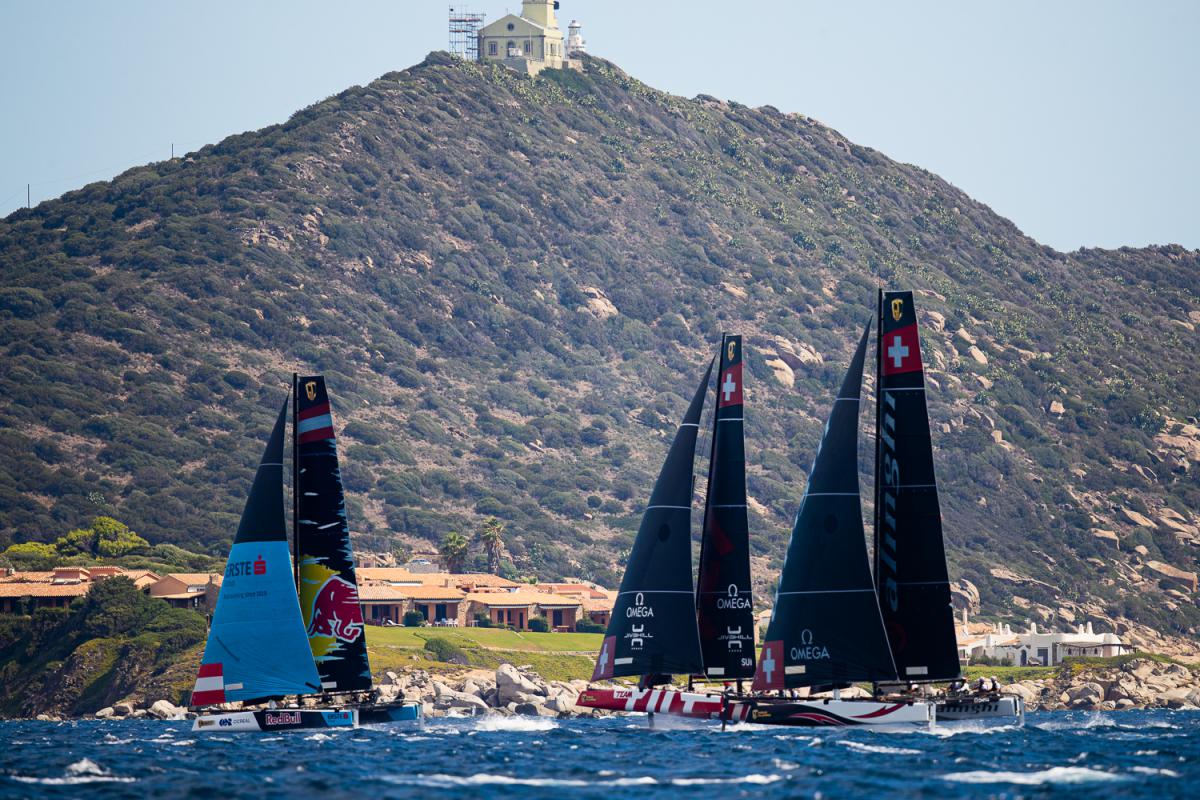 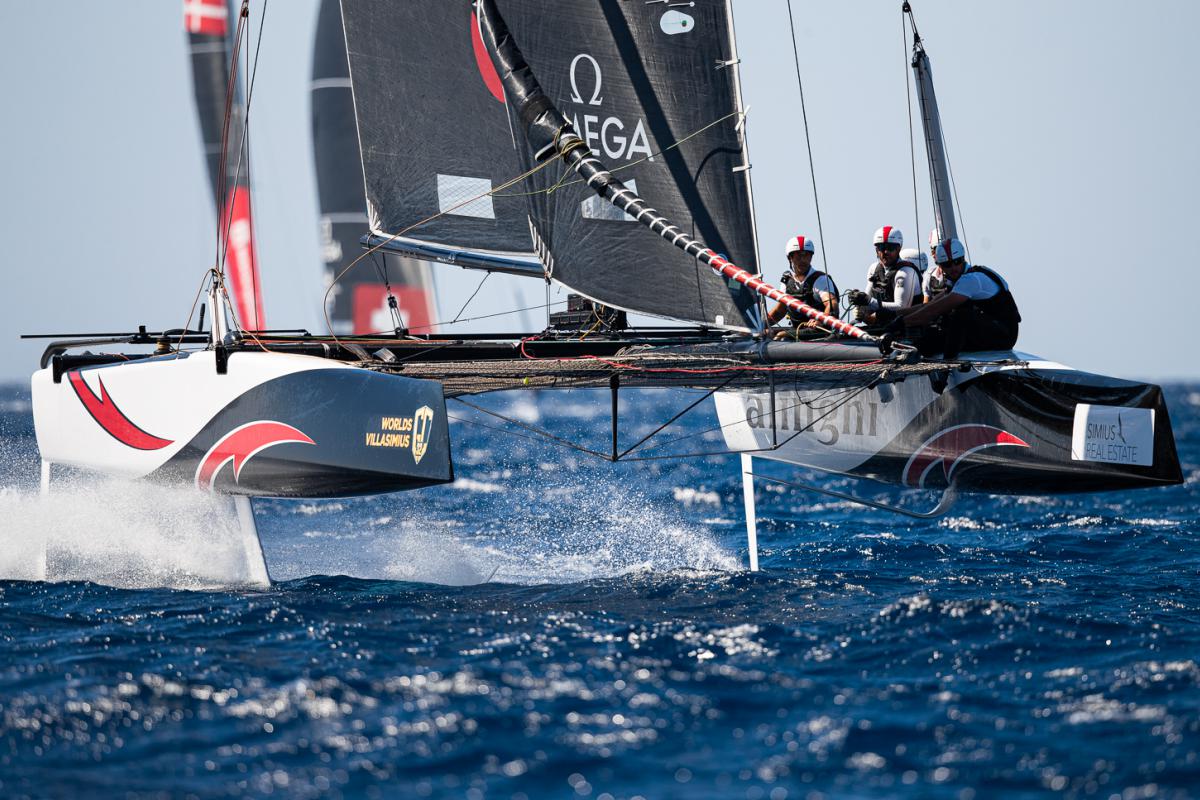 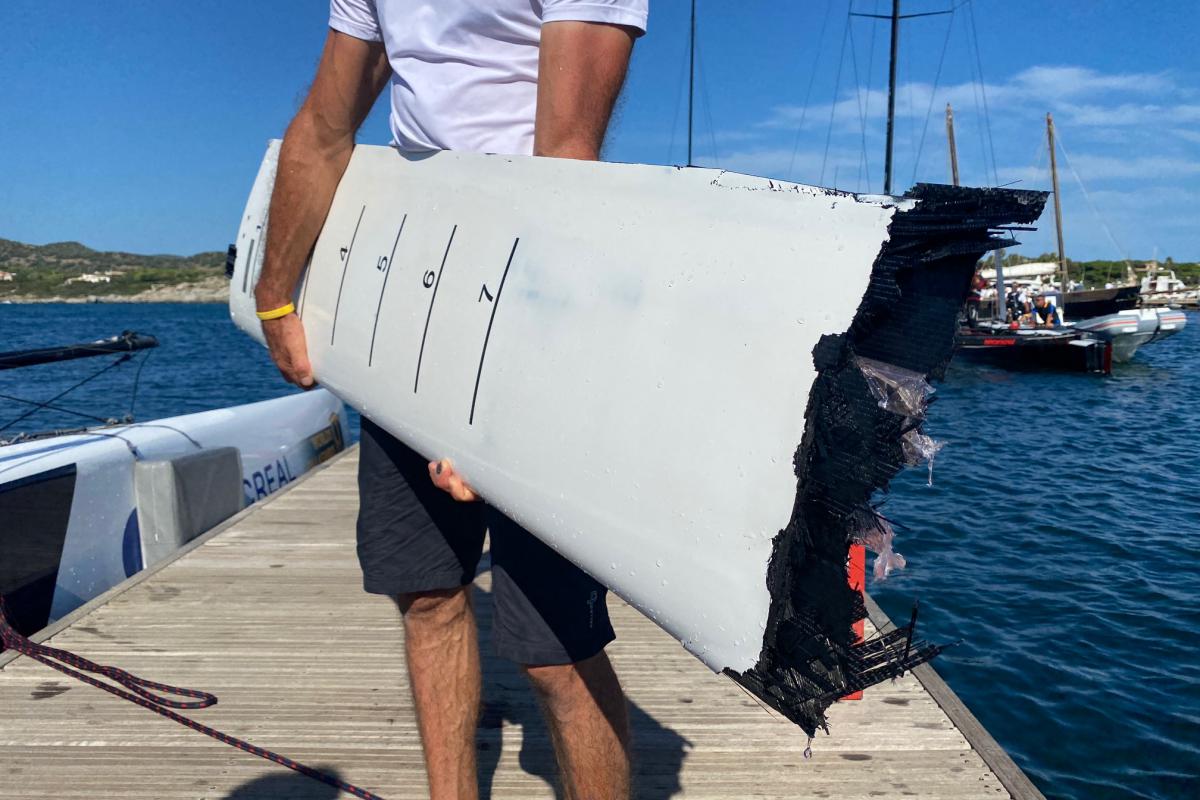 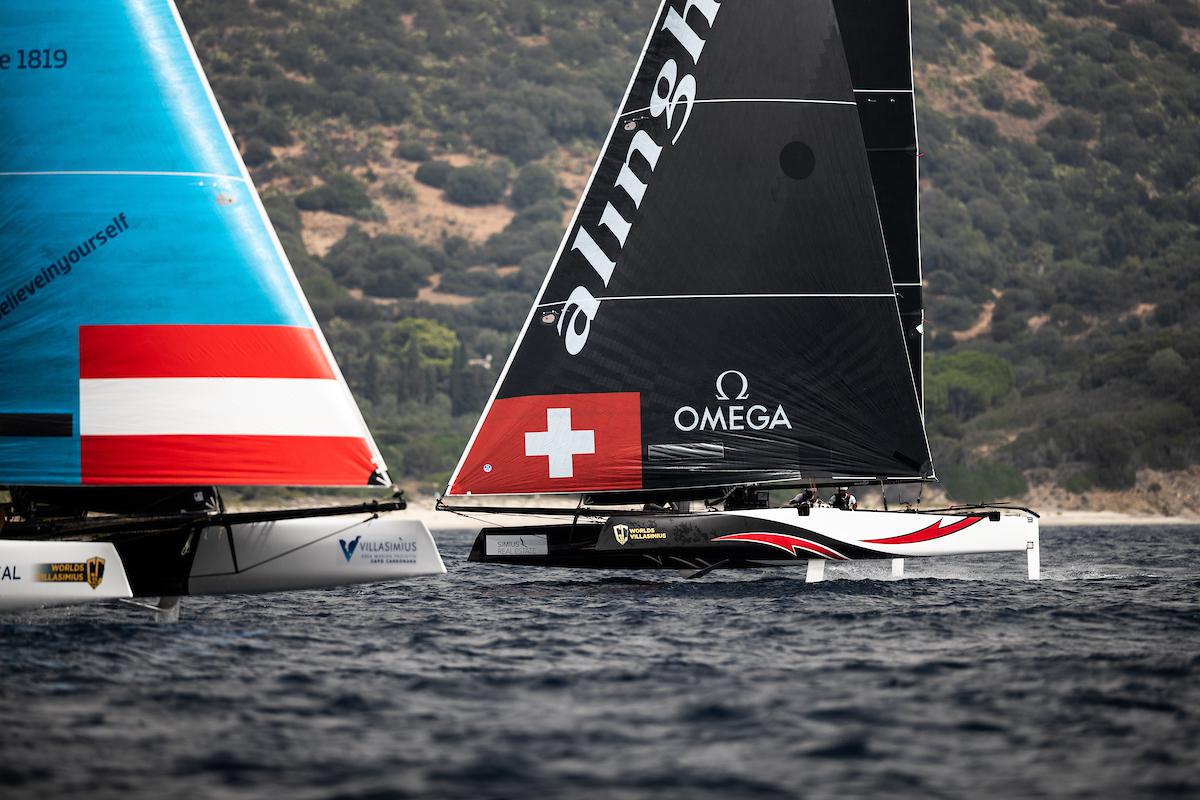 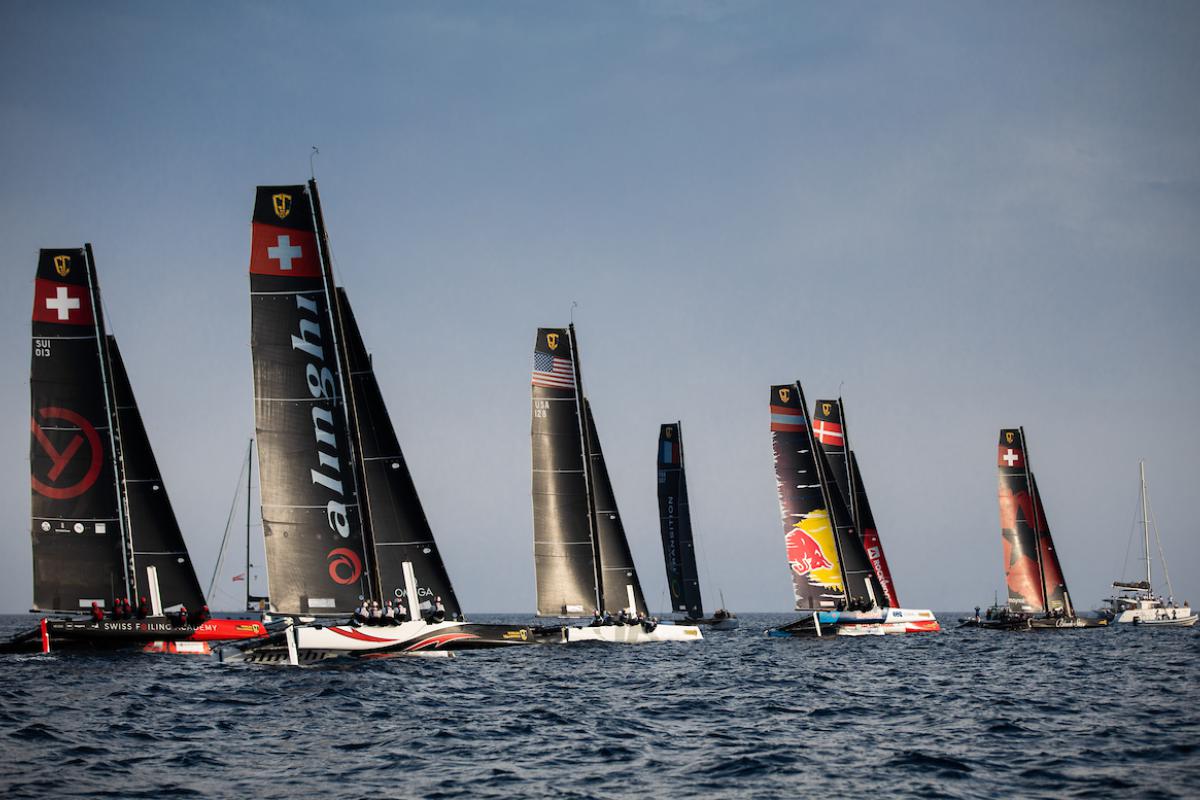 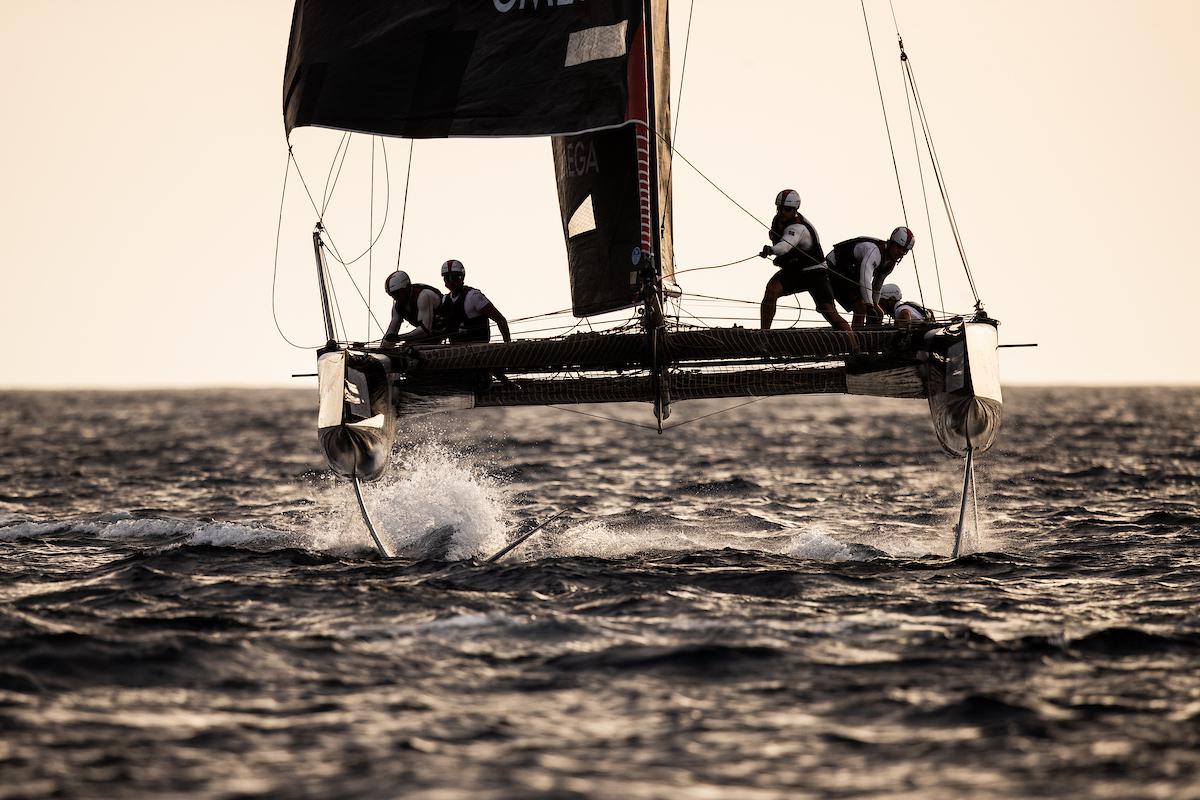 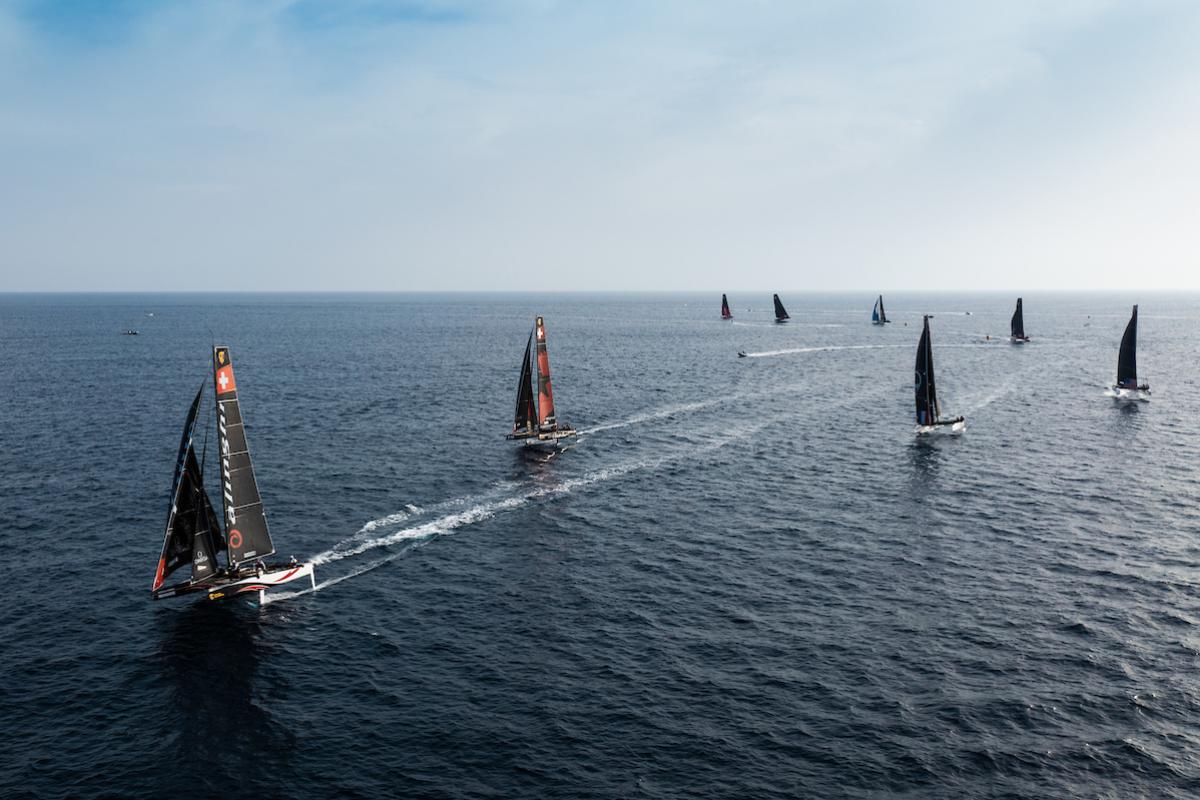 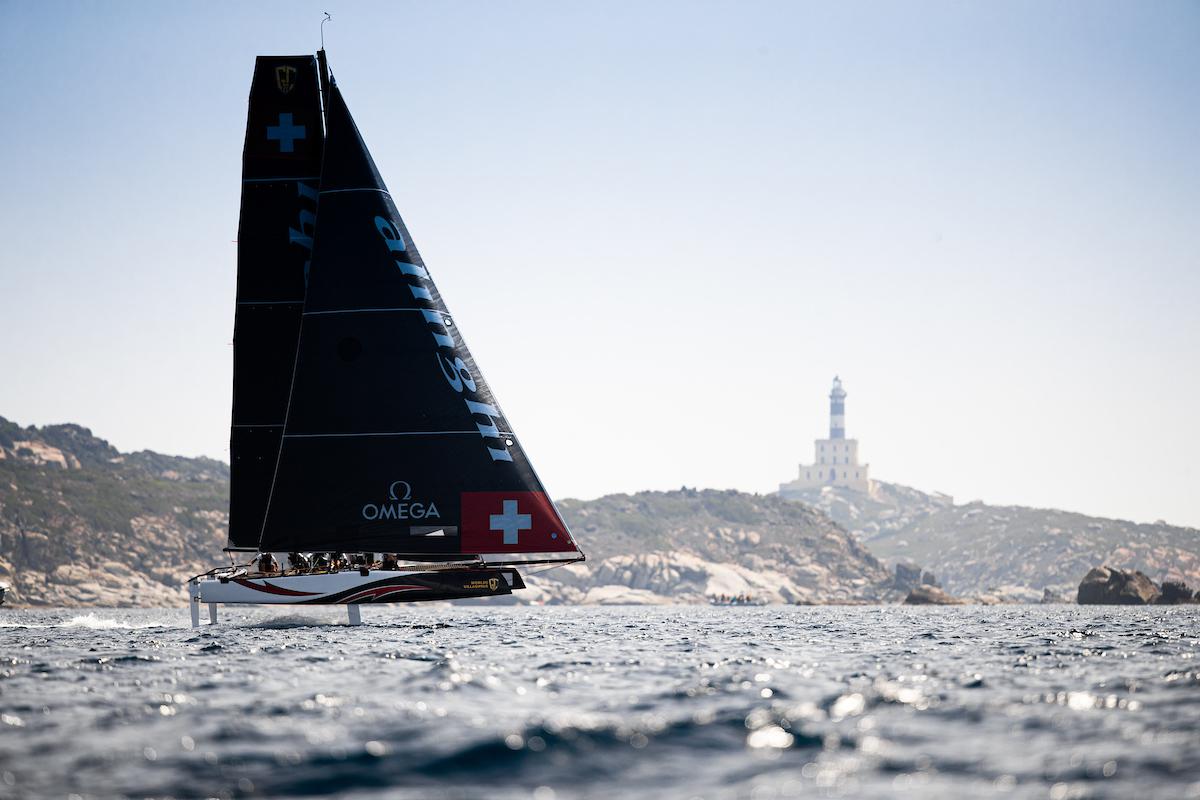 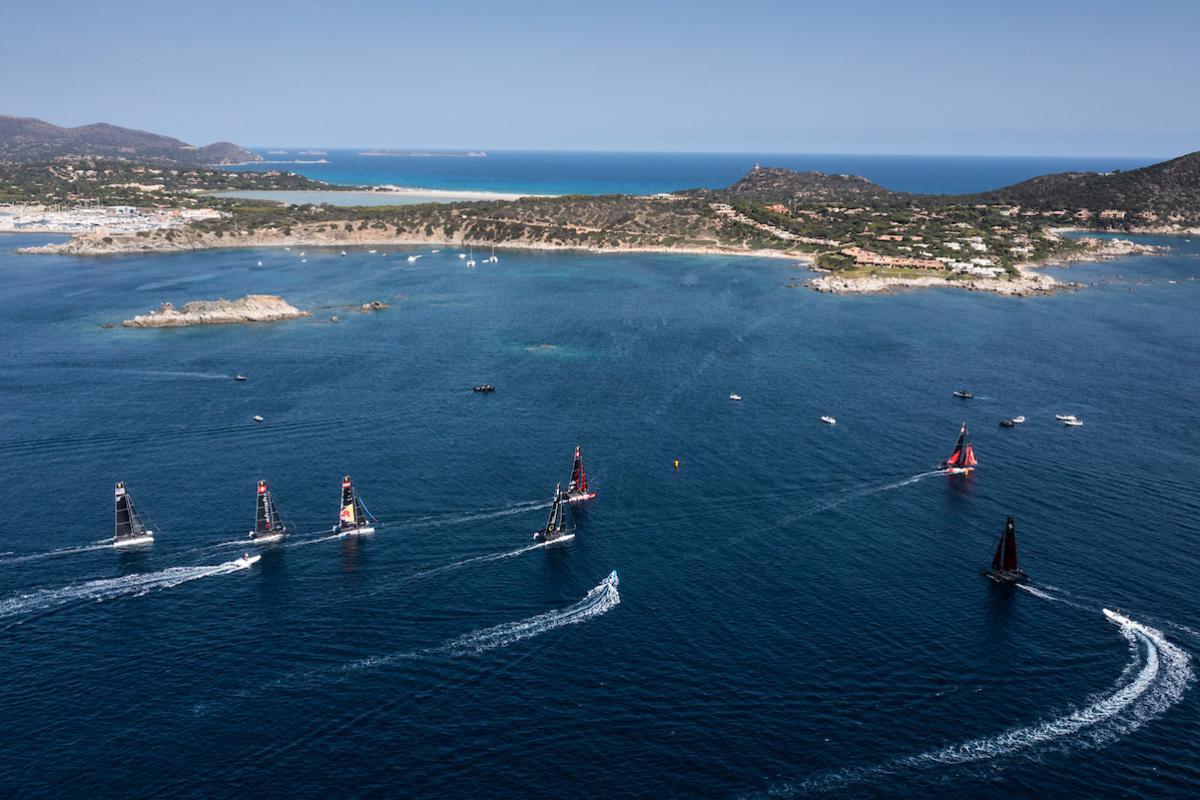 Reigning world champion, Alinghi finished second at the GC32 Worlds in Villasimius, Italy.
Tied on points with Red Bull Sailing Team after 14 races, the rule says the one finishing before the other in the last race ends up in front overall. The team had an excellent last day but broke its starboard foil two-thirds of the way into the last race. The hazards of motor sports! The double Olympic champions Hagara / Steinacher won gold while a second Swiss team, Team Tilt (Sébastien Schneiter), completed the podium. Alinghi continues to lead the annual "GC32 Racing Tour" Championship.

Arnaud Psarofaghis: "We had everything to play for until the last day, it was an exciting world championship! The world title didn't escape us only on the last round, though. We lacked consistency this week. We lost too many points in the first few days in situations that could have been avoided. Today we raced really well to make up the gap, then take the lead before the last race and I'm really happy with the performance on board. Congratulations to Roman, Hans Peter and all their team, it was a pleasure to race against them!"

Varied and complicated conditions
Eight teams competed in fourteen races in Sardinia in mixed conditions during the four days of competition. Very light breeze and rain played the spoilsport during the first two days, with respectively one and three races validated. On Saturday and Sunday, the 32-foot foilers were finally able to complete the full programme by lining up for ten races in magnificent conditions.

Timothé Lapauw: "We had a very good last day. In strong air we have good speed and efficient manoeuvres. The wind was very variable the first two days, which made it difficult on board. The race patterns were not clear and the strategy difficult to establish."

The comeback
Helmed by Arnaud Psarofaghis, Alinghi were seven points behind the leaders entering into the last day of competition. With three wins and a second place, the reigning world champions made a magnificent comeback this Sunday, September 19, to finish tied on points with Red Bull.

Nicolas Charbonnier: "We have sailed among a fleet of eight boats here compared to six in the other races this season. It's still a small fleet, but it's always interesting the more numerous it is. The classification was really tight, unlike the other GC32 races this season. We had fewer good days during these Worlds, but reacted very well and are very happy to end on such a good day. Despite the damage..."

Unfortunate foil damage in the last race
A mechanical sport like competitive sailing generates its share of complications, sometimes beyond the control of the team members. Alinghi paid the price in the last race of this championship. With the team heading for overall victory by sailing at the head of the fleet and having started race 14 with three points lead on Red Bull, the team's starboard foil (the right part allowing the raising of the boat above the water) broke into two pieces.

Bryan Mettraux: "Every year, at the start of the season, we do NDT (non-destructive testing), an ultrasound of all the carbon parts - the hulls, foils, beams and mast. This scanner allows us to check the state of wear of the boat, to identify and repair any initial cracks. We did not observe anything during the last scan and no signs of wear have been visible to the naked eye since, unlike a rope or block, which show weaknesses visually."

A first victory for Red Bull
The third of the four stages of the 2021 season, the Villasimius Cup, which also served as the World Championship, is won by Red Bull. The Austrians even sign for their very first victory since arriving on the circuit! The owner-helmsman classification (Owner Driver Trophy) goes to Erik Maris (Zoulou).

Yves Detrey: "Red Bull sailed well all week, while our first races were more complicated. We are obviously disappointed to have suffered this foil breakage in the last race and not to have been able to fight to the end. In the history of the GC32 fleet, this is the first time that a foil has broken like this."

Still leading the GC32 Racing Tour 2021
After three stages of the annual championship, Alinghi maintains the lead in the general classification, three points ahead of Red Bull.
The team will stay in Italy and return to Scarlino for the last TF35 event of the season, September 23-26.
As for the GC32 Racing Tour, the fourth and final stage of the season will be held in early November in San Pedro del Piñatar (Mar Menor), Spain.

Options to review the racing modeled in 2D thanks to the gps tracker placed on each boat from the first to the fourth days of competition: Tractrac website, or via these free apps (click here for an Iphone, or here for an Android).

To learn more about the race monitoring system, the team composition and the GC32 Racing Tour in general, a summary of the event is here.

2nd round of the D35 Trophy, as well as the GC32 World Championship